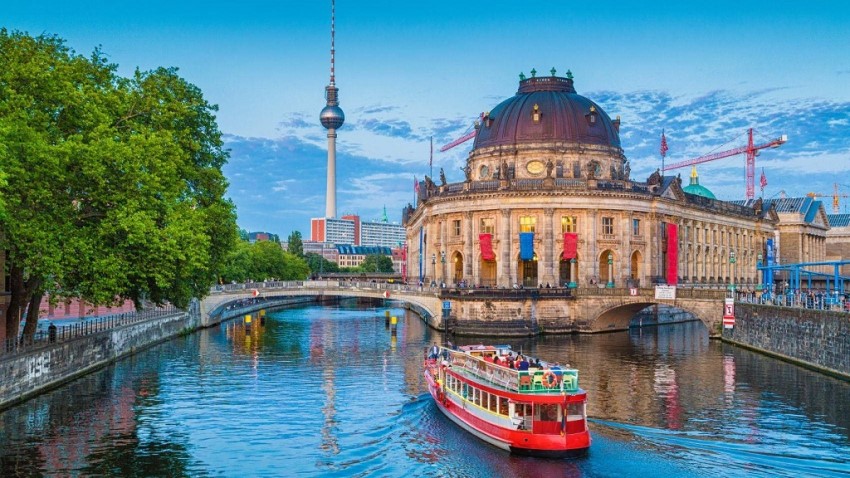 Cities are formed and grow as a result of rivers in key ways. There are many beautiful cities near rivers in the world. These cities have a thriving tourism business and are popular with visitors from throughout the world. Let’s explore with ariversside the 5 most famous cities associated with rivers in the world.

The Most Beautiful Cities near Rivers in the World

Starting with London’s River Thames, which served as the global urban hub during the early stages of the industrial revolution and urbanization. The tranquil beauty and historic elements of Europe are brought by the River Thames, which serves as a symbol of both London specifically and the UK generally. You can see the delicate but violent beauty of this river by visiting it, especially at dusk or dawn.

A serene and quiet environment can be found along the banks of the River Thames, which is home to both historic and contemporary structures including the Big Ben clock tower, the London Eye observation wheel, the London Tower Bridge, Shakespeare’s Globe Theater, St. Paul’s Church, Tate Modern, and Eton School, one of the most renowned schools in the UK,…

The grandeur of the bridges is one of the most fascinating things to behold while going on both sides of the Thames. The Tower Bridge is one of London’s many bridges and is the most recognizable and renowned in terms of bridge architecture everywhere, not just in London. The only bridge on the Thames with a motor to lift two sections of the bridge deck, each weighing up to 1,000 tons, into a still position to allow boats to pass through was constructed in 1894.

Approximately 700 kilometers of the Seine River run through various administrative districts of France, most notably the part that passes through the city of Paris. The Seine is crossed by dozens of bridges in the French capital. Every bridge has a unique aesthetic and background.

The Eiffel Tower, the Louvre Museum, the Notre Dame Cathedral, and Concorde Square are just a few of the prominent structures that are situated on both banks of the Seine River in Paris, which is one of the three fastest-growing economic cities in the world, along with London and New York.

In 1991, UNESCO designated the architectural complex on the Seine River’s banks as a World Cultural Heritage Site. The cost of real estate is the highest in both Europe and the entire world in this wonderful capital. Particularly in the western part of the city, near where the Seine runs and where many affluent people live and work.

A boat tour on the Seine is a fantastic experience that should not be missed when in Paris. The cruise will make 8 well-known stops along both banks of the Seine, allowing passengers to see famous French landmarks like Notre Dame Cathedral, the Eiffel Tower, the Louvre Museum, and the Champs Élysée Palace.

Europe’s second-longest river is the Danube (after the Volga in Russia). The river travels through numerous European nations after rising in Germany’s Black Forest. The most picturesque and lyrical river in the world is thought to run through Austria, more notably through the country’s capital city of Vienna.

The two halves of Budapest are separated by the blue Danube river, which runs through the city’s heart. On a hill with numerous stunning castles, the city of Buda is situated on the left bank. Pest, a city on the right bank, was constructed on a plain of medieval structures. Nine bridges span the Danube between the towns of Buda and Pest, each of which is stunning in its own right and acts as a vital link between them.

Stephen’s Cathedral and Schönbrunn Palace are two well-known structures in Vienna that are situated on the banks of the Danube. Danube Island, a sizable piece of land in Vienna between two rivers of the Danube, is where locals and visitors to the city can arrange outdoor entertainment events.

A lovely river known as the Amstel runs through the heart of Amsterdam’s historic district. Anyone visiting the Netherlands wants to step foot here because of this location’s legendary poetic beauty. Along with the region’s historic bridge and extensive network of canals, colorful homes line the river.

All of the buildings around the two banks are ornate and delicate in an old-world European design. You can sense the beauty that is concealed in the shapes of the historic buildings and structures that are covered in the hue of time when mixed with the low alley lights in every little corner of the river. These factors combined to provide a stunning, distinctive, and opulent Dutch tour.

The iconic bridges that cross the Amstel river, Magere, Blauwbrug, Hoge Sluis, and Berlagebrug, add to the river and adorn Amsterdam. The famed Carré, the Stopera hall, and the opera theater are located along the river. Additionally, the river is treated to a countrywide television broadcast concert each year. On the Amstel line every year are the River Amstel and Heineken Roeivierkamp regattas.

On the banks of the Spree River at its narrowest point, the historic core of the former city of Berlin was significantly smaller and developed in a valley. The Spree River drains into the Havel River at the westernmost point of Spandau County as it travels from east to west. Great lakes in Berlin, such Lake Tegeler or Lake Wannsee, are created by the Havel River’s north-south flow.

Berlin, Germany’s capital, experiences a mild seasonal climate as a result of its location in the European Plain. Rivers, canals, lakes, parks, and other natural areas make up almost a third of the city’s total area. The Berlin dialect, a subset of the Lusatian-New Marchian dialect, is found in the Central Germanic dialect region, where the city is situated.

Above are 5 cities near rivers in the world that we highly recommend. Rivers not only create gentle and airy beauty for cities, they also provide other benefits to contribute to the development of nearby cities. If you get the chance to visit Europe, you’ll probably enjoy stopping by one of these magnificent cities. And the rivers will delight you!

Learn more: Which is The Most Beautiful River in The World?